Since the creation of the Sahel Alliance in 2017, how have the living conditions of the people of the Sahel changed?

The first results report, drawn up at the end of the 3 years of existence of the Sahel Alliance, will be launched and officially published this coming Tuesday, 19 January during an original digital conference in the form of a web TV broadcast. The conference panel will bring together high-level speakers including the Spanish Minister for Foreign Affairs, the European Union and Cooperation, and the Mauritanian Minister of Economic Affairs and Promotion of Productive Sectors. The press is invited to participate in the live exchanges. 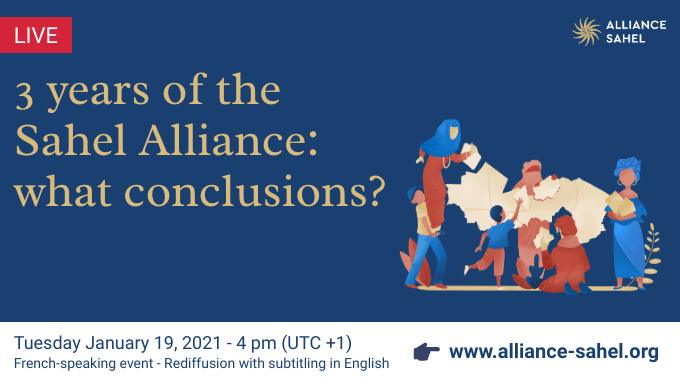 Although still young, the Sahel Alliance, launched in July 2017, now brings together a large number of development aid stakeholders in the Sahel and enables a stronger coordination than ever needed, given the challenges facing the populations of the region. In partnership with the G5 Sahel, the Alliance has developed as an important forum for exchange on best practices, joint action and innovation. The Alliance must now consolidate its action and demonstrate, in a tangible and visible way, increased effectiveness on the ground. The urgency of the situation, which continues to deteriorate despite increasing amounts of aid, demands it.

To meet the crucial need for accountability and transparency, a report on the results achieved in the 3 years of existence was prepared, in partnership with the Sahel Chair of the Foundation for International Development Studies and Research (FERDI).

This report, which will be published on 19 January at 16:00 (UTC+1), provides an assessment of the collective action, shows the impacts of the projects funded, and highlights the innovative approaches developed, as well as the challenges. The scope of the analysis allows several lessons to be learned, and the very concrete impacts are far from negligible (half a million producers supported in their activities, access to drinking water for 7% of the inhabitants of the G5 Sahel, more than 1200 civil society organizations supported,…).

About the digital conference

The digital conference panel will bring together high-level speakers from the G5 Sahel and the Sahel Alliance:

The digital conference on 19 January 2021 (16:00 UTC +1) will be broadcast via the Alliance’s website: www.alliance-sahel.org

< 116: A NUMBER FOR THE PROTECTION OF CHILDREN’S RIGHTS IN BURKINA FASO
Scroll back to top