In the Sahel, do more and better. 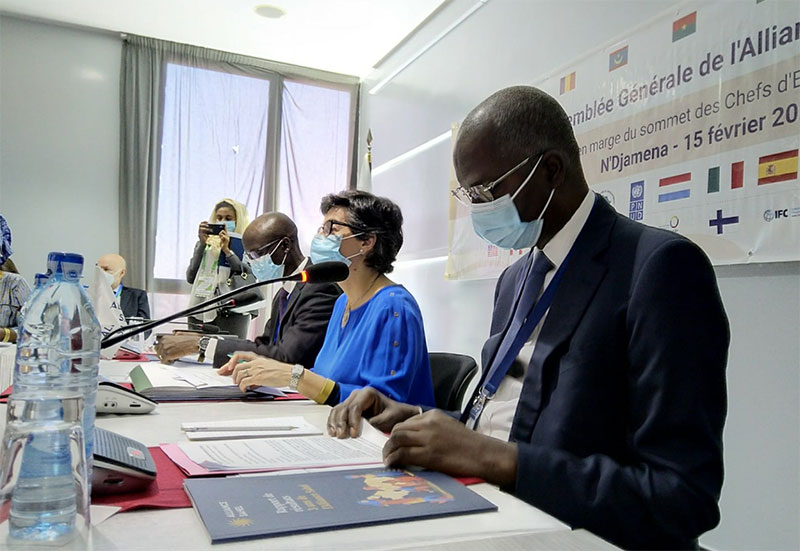 Despite its multiple potentials, the Sahel continues to face persistent crises and vulnerabilities are worsening in several regions. The COVID-19 pandemic, the effects of climate change, exacerbate an already complex and fragile situation. This calls on the G5 Governments, supported by the members of the Sahel Alliance, to do more and better. Alliance members reaffirmed at the 2nd General Assembly their commitment to increasing co-financing and joint projects, favouring flexible and simplified implementation procedures and reducing the transaction costs of interventions. In this regard, they welcomed the establishment of the Lake Chad and Liptako-Gourma Facilities and the imminent launch of a new G5 Sahel Alliance funding instrument.

The pandemic has aggravated an already complex and fragile situation. Alliance members have mobilised to respond to the health and food emergency, to reduce the social and economic impacts of the pandemic. We are committed to working towards post-COVID recovery, and to intensifying joint efforts to strengthen public health services and to achieve an inclusive and sustainable economic recovery,” said Arancha González Laya, Spanish Minister of Foreign Affairs, European Union and Cooperation, President of the General Assembly of the Sahel Alliance.

Alliance members also pledged to support the actions of the G5 Sahel countries to redeploy and maintain the state and public services in the most vulnerable areas, with a focus on providing sustainable essential services, building resilience and restoring social cohesion. To address both the most urgent needs and the root causes of the crises, they are resolutely committed to implementing an integrated territorial approach (ITA) in the priority areas, adapted to the specifics of each territory, in close coordination with the G5 Sahel Executive Secretariat, the Sahel Coalition and the Partnership for Stability and Security in the Sahel. In these areas, more attention will be paid to the most vulnerable people, women and young people, to their education, their training, as well as their social and economic integration, to restore their confidence in the future.

It will not be possible to bring peace and stability to the Sahel if women and young people are left behind. Therefore, special attention must be paid to these groups. Especially with regard to their access to education, training and employment,” said European Union International Partnerships Commissioner Jutta Urpilainen.

Members of the Sahel Alliance agreed to establish a strengthened exchange framework with the G5 Sahel Governments to intensify dialogue on public policy and priority sectoral reforms, in line with the 2030 Agenda for Sustainable Development. “This framework will first be tested in Chad, in a spirit of mutual accountability,” according to Dr Issa Doubragne, Chad’s Minister of Economy, Planning, Development and International Cooperation.

On the sidelines of the General Assembly, in partnership with the Economic Coalition in the Sahel, the Union of Chambers of Commerce and the Union of G5 Sahel Employers, they organized an event dedicated to supporting the Sahelian private sector, recognizing its essential role for stability and development.

Members of the Sahel Alliance welcomed the accessions in 2020 of Norway, Ireland and the International Organization of Francophonie (OIF), respectively as members and observers.

Sahel Alliance members and partners will pursue their efforts in the coming months. According to the Mauritanian Minister of Economic Affairs and Productive Sectors of the Islamic Republic of Mauritania:

At the close of the General Assembly, the following recommendations were adopted

Despite a difficult context, in 3 years, thanks to the partnership between the G5 Sahel countries and the Sahel Alliance, concrete and tangible results have been achieved, particularly in terms of access to essential services. These results reflect a growing commitment and more effective response mechanisms on the part of members of the Sahel Alliance. Thus, since its launch in 2017, the number of funded projects has doubled, as have financial commitments (from 7.3 to 16.9 billion euros) and disbursed amounts.

Thanks to the Sahel Alliance projects, 550,000 people have had access to electricity, 1.6 million people have benefited from sanitation services and 5.5 million have been provided with drinking water. In terms of food security and health, the Alliance has enabled 2.9 million people to benefit from food assistance, 3.4 million children to be vaccinated and 660,000 women of childbearing age to benefit from a family planning method. In terms of training and professional integration, 515,000 producers and breeders were supported, 420,000 young people received vocational training, 2,400 judges, lawyers and clerks were trained and 1,250 civil society organisations were supported.

For greater transparency and accountability, the Sahel Alliance has just launched a public data portal on its projects: https://opendata.alliance-sahel.org/portfolio

Joint declaration on implementation of UNR1325 resolution in the Sahel

Side-event “Dialogue with the Sahelian private sector” – Conclusions and recommendations

Speech of E. Ousmane Mamoudou Kane, President of the Council of Ministers of the G5 Sahel, Mauritanian Minister of Economic Affairs and Productive Sectors