The Sahel is considered one of the most vulnerable regions in the world to the consequences of climate change. The Sahel is a region with immense potential. However with challenges related to environmental degradation, population growth, poverty and conflict, the effects of climate change are currently exacerbating existing vulnerabilities. The members of the Sahel Alliance are providing significant support to the G5 Sahel countries in implementing ambitious climate programmes. To date, 34% of the projects supported by the Sahel Alliance have a primary or significant climate-related objective, corresponding to an amount of €7.8 billion committed. 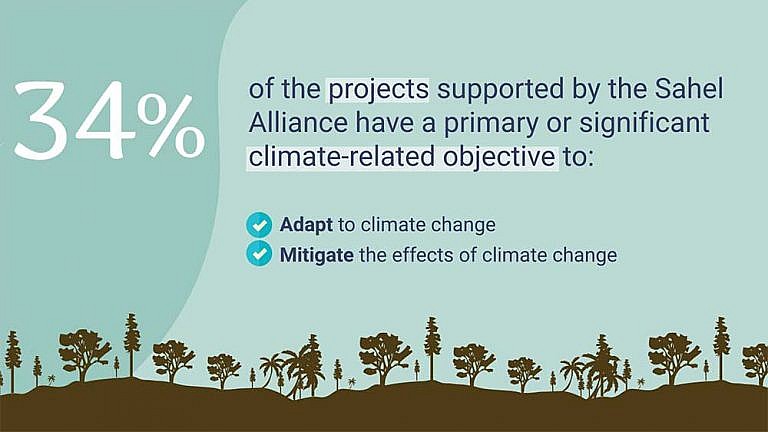 The Sahel: a region among the most vulnerable to climate change

G5 Sahel countries are among the 20% most vulnerable to the risks of climate change, with Chad ranking first, according to the ND-GAIN index, followed by Niger (9th) and Mali (12th). Increased frequency of extreme weather events, depletion of natural resources, food and water insecurity, rising diseases and the upsurge in migration and displacement are just some of the impacts of this phenomenon.

The Nationally Determined Contributions (NDCs) of all G5 Sahel countries include, as priority areas:

In 2021, G5 countries will submit their updated contributions with increased ambitions. The members of the Sahel Alliance are committed to supporting them in fulfilling these aspirations, aiming at better adaptation to climate change and mitigation, while promoting actions offering climate co-benefits.

Recognising the importance of climate for the Sahel and having defined it as a cross-cutting working theme, the Sahel Alliance formally established in July 2019 a dedicated climate working group, co-chaired by the African Development Bank and the Dutch Ministry of Foreign Affairs. The objectives of this group are to mainstream both climate change mitigation and adaptation in all Sahel Alliance interventions and to help harmonise and coordinate efforts between partners and G5 countries’ priorities, as defined in the NDCs or National Adaptation Plans. 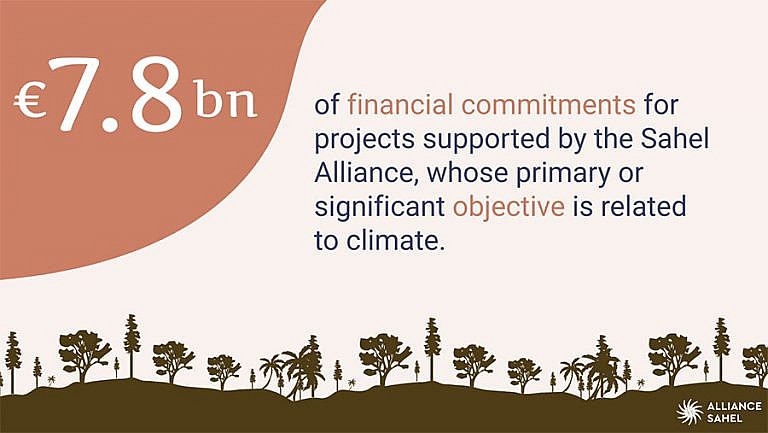 This Sahel alliance working group made several recommendations, including:

Examples of projects supported by the Sahel Alliance

Many members are already contributing to the African Great Green Wall initiativein the Sahel (land restoration, carbon sequestration, job creation). The French Development Agency, in collaboration with the EU, the World Bank, IFAD, the Green Climate Fund and other members of the Alliance, has planned to step up its support for this initiative through a multi-donor and transnational approach, focusing on rural resilience and the development of agroecological practices.

The African Development Bank is spearheading the Desert to Power initiative, a large-scale regional programme to promote broad-based investments to harness the solar potential of 11 Sahelian countries (including the G5 Sahel countries), in order to deploy 10 GW of solar energy by 2030 and provide access to electricity to an estimated 250 million people across the Sahel. The AfDB also manages several climate funds, such as the ClimDev-Africa Special Fund (CDSF) and the African Climate Change Fund (ACCF), to improve the meteorological network and climate forecasting systems in the Sahel (CDSF project) and to create an institutional and political environment conducive to the transition to green growth in Mali (ACCF project).

Funded by the AfDB with the support of FAO and the Lake Chad Basin Commission (LCBC), the BIOPALT project, implemented by UNESCO, aims to safeguard the hydrological, biological and cultural resources of this basin. The project enables the five LCBC member countries to build their capacity for coordinated transboundary management of the basin. It includes the establishment of a flood and drought early warning system for climate resilience, to protect the livelihoods of more than 40 million people.

At the regional level, France supports the Sahel countries through the CREWS (Climate Risk and Early Warning Systems) initiative, which is implementing an early warning systems project in the region. France is also providing financial support to the African Risk Capacity insurance mechanism to cope with the impact of extreme weather events. Through the French Development Agency’s Adapt’Action mechanism, France is supporting the establishment of a national monitoring and evaluation system for the implementation of Niger’s Nationally Determined Contribution (NDC), in partnership with UNDP and the World Bank.

In Burkina Faso and Niger, WFP and UNICEF are working with local and international NGOs under the USAID-funded Resilience in the Sahel Enhanced (RISE) initiative. This initiative addresses the underlying causes of chronic vulnerability and works to build resilience to recurrent external shocks. The programme has been supporting the same vulnerable communities for several years and has benefited approximately 400,000 people in 60 communities in Burkina Faso and Niger. In Niger, more than 90,000 hectares of degraded land have been rehabilitated, significantly increasing production and access to food for the most vulnerable communities.

Under the United Nations Integrated Strategy for the Sahel (UNISS), the flagship project “Empowering Women through Climate-Resilient Agricultural Value Chains” has already directly and indirectly benefited more than 30,000 women entrepreneurs in the agribusiness sector. The initiative is a joint UN programme with the G5 Executive Secretariat and involves UNDP, FAO, UNICEF, UN Women, WFP, IOM, UNFPA and OCHA.

< JOINT MISSION TO NIGER: PROVIDING A COLLECTIVE AND CONCERTED RESPONSE TO THE CHALLENGES OF STABILISATION AND DEVELOPMENT
Mission of the Coordinator of the Sahel Alliance to Burkina Faso >
Scroll back to top