In the face of the worsening of conflicts in many regions of the Sahel and their multiple consequences on the living conditions of the populations, the international community is seeking to strengthen the relevance, effectiveness and impact of its aid in these areas, paying particular attention to the prevention and treatment of the causes of fragility. To this end, the members of the Alliance have committed to supporting the actions of the G5 Sahel countries in favour of the redeployment and maintenance of the state and basic services in the most vulnerable areas and have developed an innovative intervention approach: the Integrated Territorial Approach (ATI).

This approach aims to respond both to the most urgent needs of the population and to address the root causes of crises in risk areas. Integrated, multi-sectoral and adapted to the specificities and constraints of each territory, this approach is implemented in close coordination with the authorities of each country and the G5 Sahel Executive Secretariat. It articulates the logics of security, consolidation and prevention and pays increased attention to the most vulnerable people, women and youth, their education, training, social and economic integration, to give them confidence in the future. 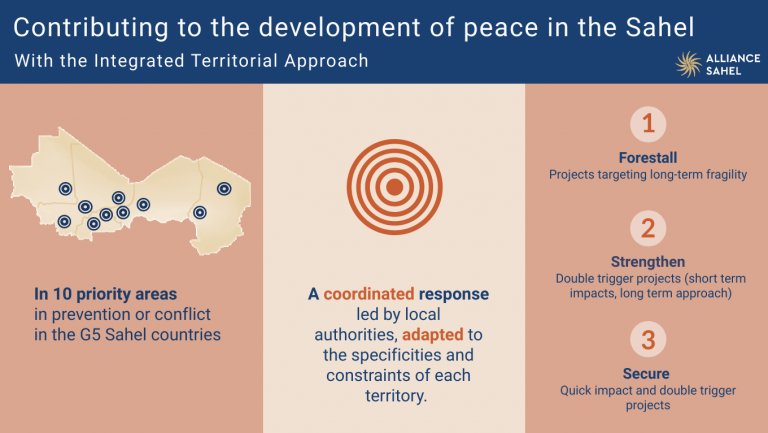 At the heart of the ATI lies the desire to promote dialogue and coordination of actions with multiple actors: international (humanitarian, security, stabilisation and development actors), national and local. The aim is to develop a coordinated approach that is as integrated as possible between these different actors, and to pool the resources and methods of action of the members of the Sahel Alliance working in these areas. In this respect, coordination with the actors of the Sahel Coalition of the Partnership for Security and Stability in the Sahel (P3S) is essential, particularly in order to promote the return of basic services in the priority areas identified, which is an essential factor for stability.

In the framework of the ATI, ten priority areas were targeted by the members of the Alliance. The choice of these areas was discussed among members and with the authorities of the G5 countries. These areas naturally overlap with the 28 areas recommended by the G5 Sahel Priority Action Framework (CAPI) (see box below), and reflect a dual focus on conflict areas and prevention areas. 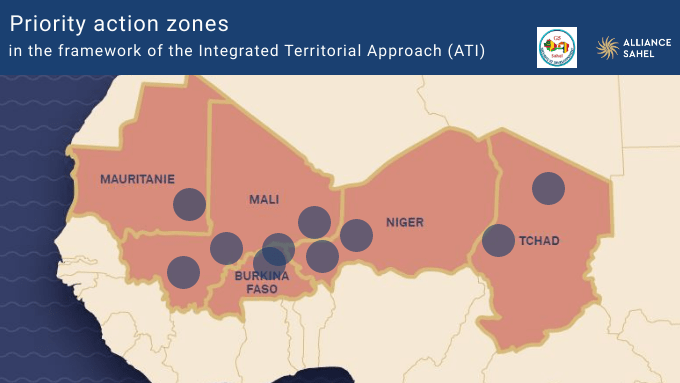 The choice was also based on the diagnoses of the RRA (Risk and Resilience Assessment) study, led by the World Bank and the result of a collective mobilisation of the Sahel Alliance to rethink the contribution of development to peace and the prevention of violent conflicts in the Sahel. This research has made it possible to precisely identify the risk factors in these areas and to formulate recommendations for addressing them. It is important to note that while the ATI targets priority areas, this is not to the detriment of interventions in other areas/regions of the G5 Sahel countries. The 10 target areas have been characterised in three typologies (secure, consolidate, prevent). This implies that, depending on the situation encountered – in particular the security situation – at the territorial level, and its evolution, security, stabilisation and development actions can be tackled successively or form a “nexus”. In the latter case, the phases are combined and the actors intervene simultaneously, taking care to ensure the coherence and if necessary the adaptation of the actions implemented. 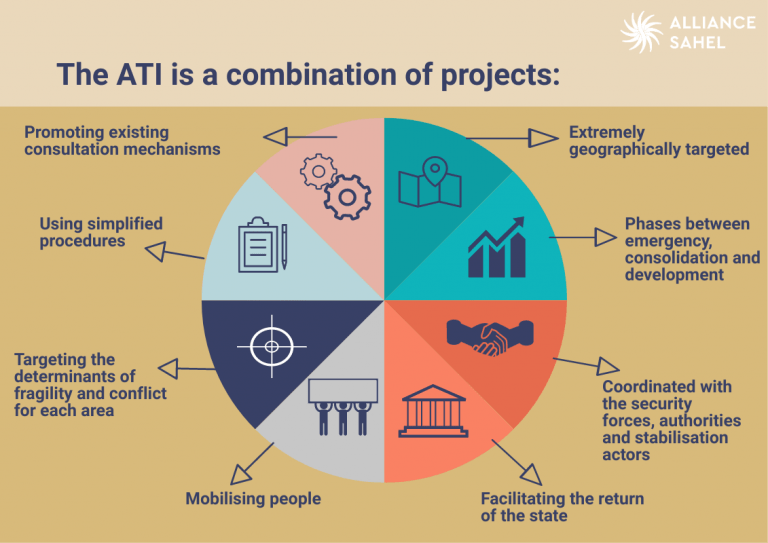 Pragmatic tools for a concrete implementation

In order to facilitate the implementation of the ATI, decision support tools for development interventions in the selected areas have been created. These include the “integrated territorial approach” database, which is currently being set up and will list the activities of Alliance members in these areas and contextual data. This database will allow for mapping and cross-analysis to optimise coordination between members within the ATI framework and to facilitate decision-making and operational planning of activities. Another important tool – in addition to the RRA diagnostic tool mentioned above – that is part of the ATI dynamic is the AFD-funded Plateforme d’Analyse, de Suivi et d’Apprentissage au Sahel (PASAS). This is a platform that makes available the knowledge and studies available on the Sahel region to help design projects. 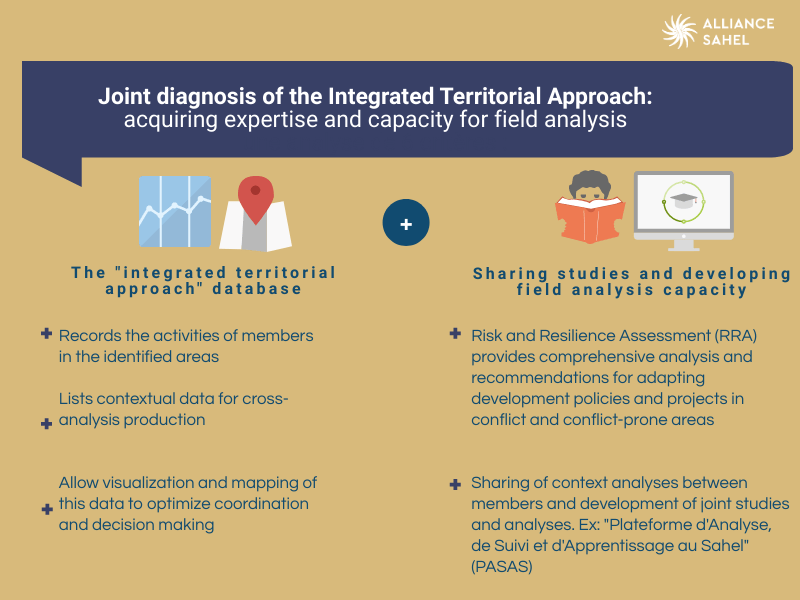 In addition to strong coordination with the authorities, who are fully involved in the definition and implementation of ATI, the involvement of beneficiaries, populations, local communities and territorial administrations is essential for the success of this approach. The operational strategies defined in each area will be based on local development plans, with appropriate operating methods and measurable success indicators.

The ATI is aligned with the principles of action prescribed in the G5 Sahel Framework of Priority Actions, which aims to address the multidimensional challenges faced by the G5 countries and increase aid effectiveness in vulnerable areas. Adopted by the G5 Sahel in February 2020, it is a reference document for international partners. The CAPI aims to identify rapid, realistic, measurable and flexible actions to be carried out on the security and development aspects in priority fragile areas, extended to the humanitarian dimension, governance and reconciliation. In particular, the CAPI endorses the identification of Priority Intervention Zones (ZIPs) on which to focus efforts and specific measures to be taken. The ITA is part of this framework, since the choice of priority areas was made on the basis of this categorisation.

< Niger: access to drinking water in fragile cross-border areas (PDU)
A GLIMMER OF HOPE FOR THE WHITE GOLD SECTOR IN BURKINA FASO >
Scroll back to top