Faced with the scourge of gender-based violence on the front lines, Mauritanian police have undertaken a vast task: to strengthen the skills of its staff and equip them to provide better case management. There are many obstacles that prevent victims from walking through the police station door to seek redress for the violation of their rights.

Reporting from a Juvenile Police Unit in Nouakchott, where the team was recently trained with the support of the Spanish cooperation. 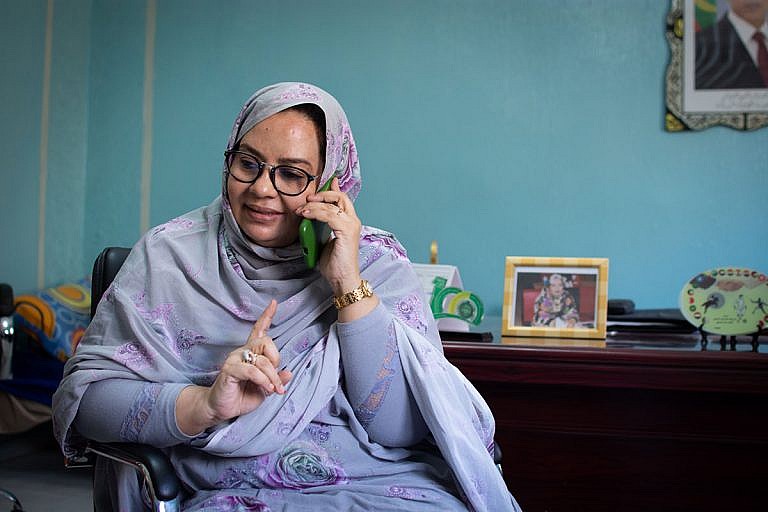 Gender-based violence was a taboo subject in Mauritania. It is a scourge that affects everyone,” deplores Hendou Mint Cheikhna, police commissioner in the West Nouakchott Juvenile Police Unit.

Mauritania wanted to combat this phenomenon by creating the first police station for minors in Nouakchott, with trained and qualified staff, in 2005.

Remove obstacles to the care of victims

In Mauritania, victims of gender-based violence (GBV), including sexual violence, face enormous difficulties in receiving minimal care. The main obstacles are the lack of knowledge of the procedures approved by the Mauritanian government, as well as the high cost to families in terms of time and financial means. This cost particularly stems from the lack of coordination between the various entities and stakeholders involved in the care process.

In order to overcome these hurdles, the Mauritanian police have undertaken a major project with the support of the Spanish cooperation (AECID): training their staff and creating tools, including a procedures manual in line with national and international standards for dealing with cases of gender-based violence. This manual intended for police officers describes how to handle, reference and manage data on GBV cases. It provides a coherent, integrated and confidential framework for the victims. This tool contributes to improving the capacity of the Mauritanian police and also helps raise awareness amongst police officers about the phenomenon of gender-based violence. 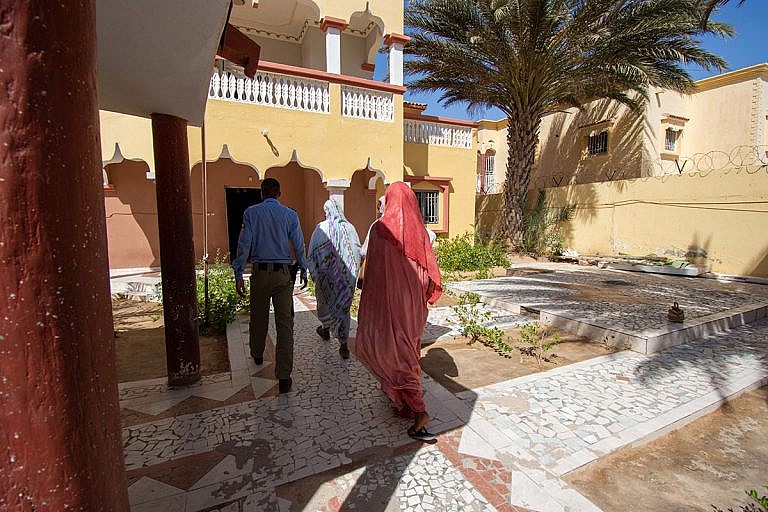 Accompanied in Spain and Mauritania by the Spanish police’s specialised units on GBV case management, Hendou Mint Cheikhna and her colleagues are now offering, within the Nouakchott police’s Juvenile Unit West, an adequate response to victims of gender-based violence, particularly sexual violence. As soon as they arrive, victims and their families are welcomed by one or more community relay persons, who accompany them to the various stakeholders involved in their care: request for police requisition, anonymous medical care at the hospital, connection to a listening centre, contact with a legal aid service, etc. The victims are then taken care of by a community relay person who is responsible for their care and support.

The training of the staff of the Juvenile Unit has helped strengthen collaboration with other partners, including from the medical field. When a case of GBV is reported, the police can initiate the process of management by the relevant stakeholders. Indeed, we must act quickly to reduce the risks, especially in the case of sexual violence.

Any victim who comes is directly referred to the victim management unit at the Mother and Child Hospital in Nouakchott, that is specialised and provides all the necessary documents for the victim’s medical protection,” explains Hendou Mint Cheikhna.

This collaboration between the Juvenile Police Unit and the hospital ensures that victims receive timely, confidential, comprehensive and free care. 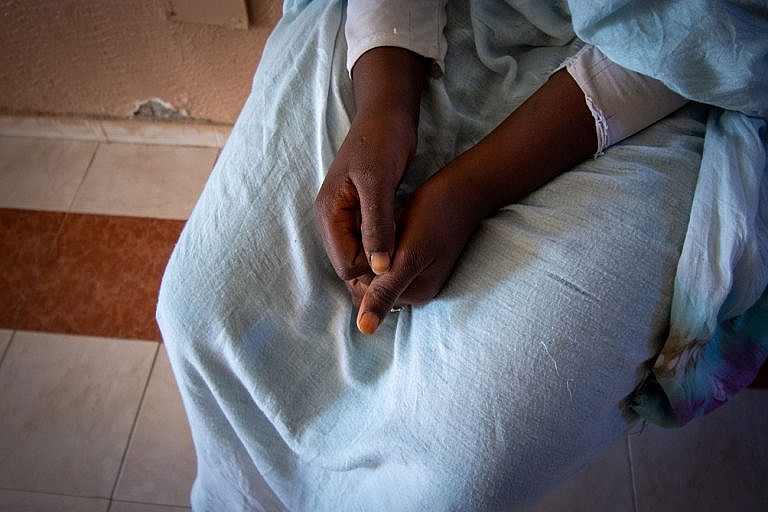 Thanks to their active listening skills, community relays create a climate of trust with their interlocutors.

It was my vocation to be a community relay. I like to help, especially if it concerns the younger ones. It allows me to contribute to the fight against violence against children,” says Khadi Mint Elkhretani, a member of the AFCF Association (Women’s Family leaders’ Associations) since 2010 who is also active in the Tevragh Zeina Juvenile Police Unit, in the suburb of Nouakchott.

Improving the management of gender-based violence is one thing, preventing it is another. The police stations of Nouakchott and Nouadhibou have carried out sensitisation campaigns on gender-based violence, particularly in schools. These campaigns have had positive effects, leading to a level of awakening among the population. The public image of the police has been strengthened as a key player in protecting the population.

Before, the children could not talk about this scourge, now they have the opportunity to talk with their parents, to come and file a complaint directly without having to go through other intermediaries,” says the police Commissioner. 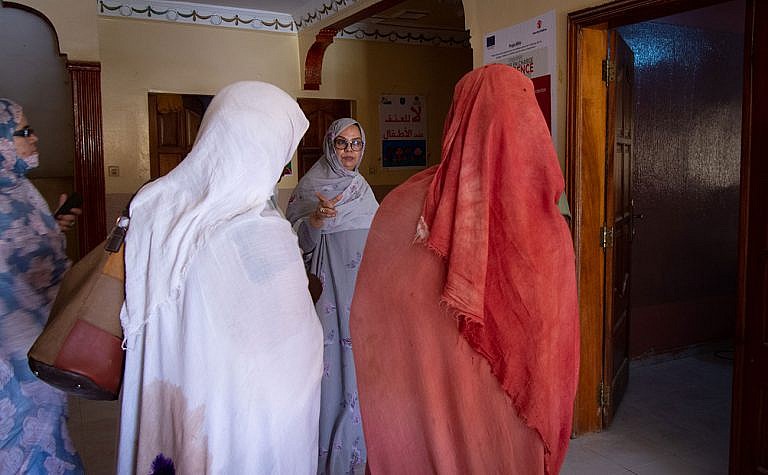 Lift taboos to fight against gender based violence

The issue of sexual violence was hitherto settled between families. Hendou Mint Cheikhna is proud to see that victims and their families now dare to walk through the doors of her police station:

By giving them what they are looking for, by giving them confidence, by looking for the aggressors, by bringing them to justice, [the victims] are at peace, they are safe, they know that there are people who listen to them and who accompany them.”

According to her, the increase in the number of victims in the police registers actually makes visible what used to be taboo: people finally dare to come and denounce this type of situation.

The results of the Mauritanian police are encouraging. The Spanish cooperation has therefore decided to extend its support for a further two years, with the aim of expanding it to other areas of Mauritania, known for their lack of adequate mechanisms within police stations to deal with cases of gender-based violence. 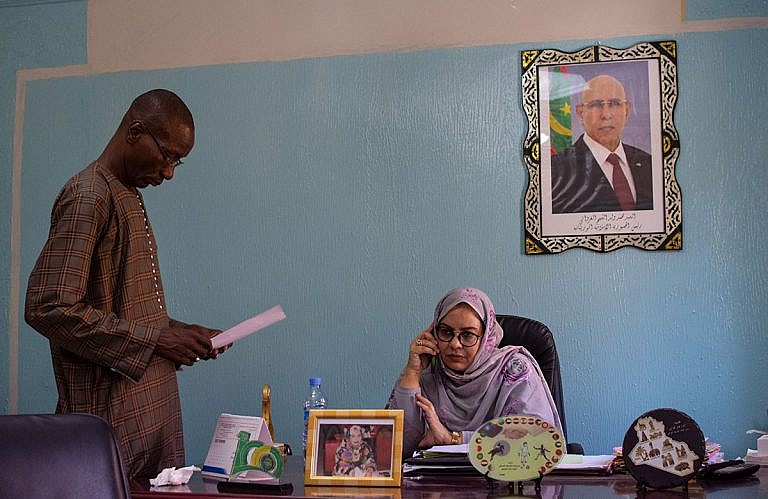 Hendou Mint Cheikhna is actively involved in deploying the tools and knowledge in the new regions:

We are in the process of creating [data] bases for the cities in the hinterland. Training of relevant staff has started.”

The processing and analysis of the data is indeed crucial to make visible the scope of the phenomenon of gender-based violence, and especially sexual violence. The Mauritanian police can count on the support and experience of the Spanish police in the analysis of the data collected. This will allow a better assessment of the risks and greater protection for victims.
During this second phase, the Spanish cooperation also plans to support the creation of a press office specialised in gender-based violence, in order to further break the taboo around violence.

The invisibility of the victims of gender-based violence

In Mauritania, almost 70% of women face some form of violence (physical, sexual, psychological, economic). The scale of the phenomenon of sexual violence is not well known, as it is still often viewed by the public as a private matter. Few victims dare to file complaints for fear of being stigmatised, rejected, punished, especially given that Mauritanian law remains unclear as regards the criminalisation of gender-based violence.

< Meeting the challenge of women’s empowerment in the Sahel
Round table on electricity in Niger: “We note that our agenda is neither overly ambitious nor utopian.” >
Scroll back to top