Since the creation of the Sahel Alliance in 2017, many projects with sometimes unique approaches have contributed to greater women’s empowerment and gender equality. Here are a few of the projects supported by the Sahel Alliance that are changing the lives of women (and the whole family!) in Sahelian countries.

What if men were to become actors in the fight against gender inequality?

In Burkina Faso, a school of an unprecedented kind has emerged: the school of husbands, a place of learning and dialogue where men meet weekly to exchange without fear of being judged. The idea behind these clubs of a new kind? Improve gender equality by increasing men’s awareness regarding women’s rights, the distribution of household work, family planning, pregnancy and mental health.

Ouanibaouiè Bondé, facilitator of the husbands’ club in the village of Boni, explains:

Here, they can talk about subjects traditionally left to women, such as family planning, prenatal counselling, the need to give birth in a health centre, and post-natal consultations without worrying about what people might say. Convincing husbands that they have a role to play as regards these issues contributes to harmony within couples and families.”

In a country deeply rooted in tradition, the World Bank-funded initiative is bearing fruit, as Martine Gnoumou, the wife of Waimbabie Gnoumou, a student at the husband school, attests:

On the day I gave birth, my husband is the one who took me to the hospital. And he wanted to stay with me during my delivery. That day, I was so happy that I forgot the pain.”

The schools of husbands represent one of the components of the initiative Women’s Empowerment and Demographic Dividend in the Sahel (SWEDD), which covers the G5 Sahel and Côte d’Ivoire. More than 1.640 husband schools have been created throughout that area since 2015!

Empowering women in the Sahel to sustain the whole family

In Chad, targeting women actually affects all members of the household and changes their lives. Roland Djelasem, GIZ Monitoring and Evaluation Officer in Chad, explains:

When women succeed, there is a sense of harmony and dynamism within the family. If we help a woman, she can assume responsibility for her child’s schooling, the costs of care, and the daily ration of food. Women contribute effectively to the family.”

In this Sahelian country, the integration and participation of women has been supported at all levels in the Project for Building Resilience and Peaceful Coexistence in Chad (PRCPT), co-financed by two members of the Sahel Alliance, the European Union and the BMZ (the German Federal Ministry for Economic Cooperation and Development).

This project started with the creation of local development plans identifying the needs of the inhabitants. All sections of the population were involved, especially women and young people, two groups that are generally less represented in decision-making bodies.  Priority actions have been funded based on the real needs and interests of the most vulnerable groups. 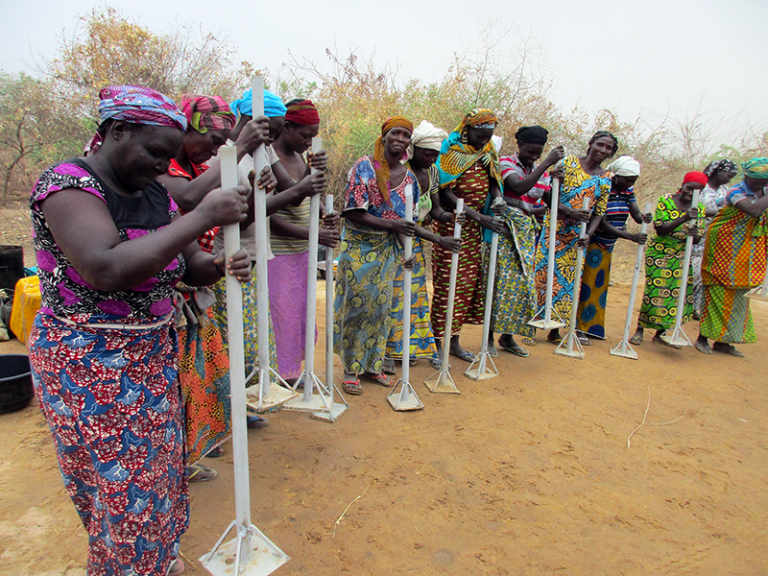 For example, nearly 200 social amenities, benefiting particularly women and young people (schools, health centres, water points, latrines, etc.), have been built or restored, improving access to basic social services for more than 250.000 people! Grants have also been awarded to groups of female market gardeners so that they can increase their economic self-reliance and contribute financially to the household.

Involving women in decision-making bodies is a true revolution in a socio-cultural context that often relegates women to the lower ranks and in a country with a particularly low youth literacy rate (22% for women and 41% for men).

Malian women farmers who are resilient to climate change

Women account for up to 80% of the Sahel’s workforce in agriculture. Their daily lives are closely linked to agricultural products and natural resources. They play a crucial role in managing the food and nutrition of families. However, the degradation of land and natural resources caused by climate change disproportionately impacts them, making them economically and nutritionally vulnerable.

To increase her economic self-reliance and food resilience, Alphonsine took part in a training activity in sustainable agriculture. She learned about the techniques of vegetable production and conservation:

We gained new knowledge that improves production and increases our income. Better yet, the program has allowed us to diversify our vegetable production with the introduction of potato, tomato, chili cultivation … which greatly helps achieve household food security and contributes to the reduction of child malnutrition, poverty while strengthening our budgets. This has had a positive influence on social cohesion, as women [from different ethnic communities] meet and dialogue during training sessions on the ground.”

Financed by Luxembourg’s cooperation agency and implemented by UN Women, this training has already enabled more than 11.000 Malian women farmers to strengthen their skills and resilience.

Gender, the priority of the Sahel Alliance

The realisation of the rights of women and girls and gender mainstreaming are key principles of the Sahel Alliance. During the last steering committee that brought together Alliance members and representatives of the G5 Sahel countries, Spain reiterated this, citing the promotion of gender equality and women’s rights as one of the central themes of the Spanish presidency of the Sahel Alliance.

The commitment of the Sahel Alliance members to gender equality and respect for the rights of women and girls echoes the priorities of the G5 Sahel Women’s Platform . The main mission of this entity is to “contribute to the mainstreaming of gender and of the specific priorities of women including girls at all levels in the G5 Sahel countries for harmonious, secure, equitable, inclusive and sustainable development in the Sahel region.”