The 4th Steering Committee (OSC) of the Sahel Alliance was held on 10 November 2020  by video-conference, for a good number of participants, due to the health context marked by the Covid-19 pandemic. This quarterly milestone of the Sahel Alliance saw a strong participation of its members, observers and representatives of the G5 Sahel countries. 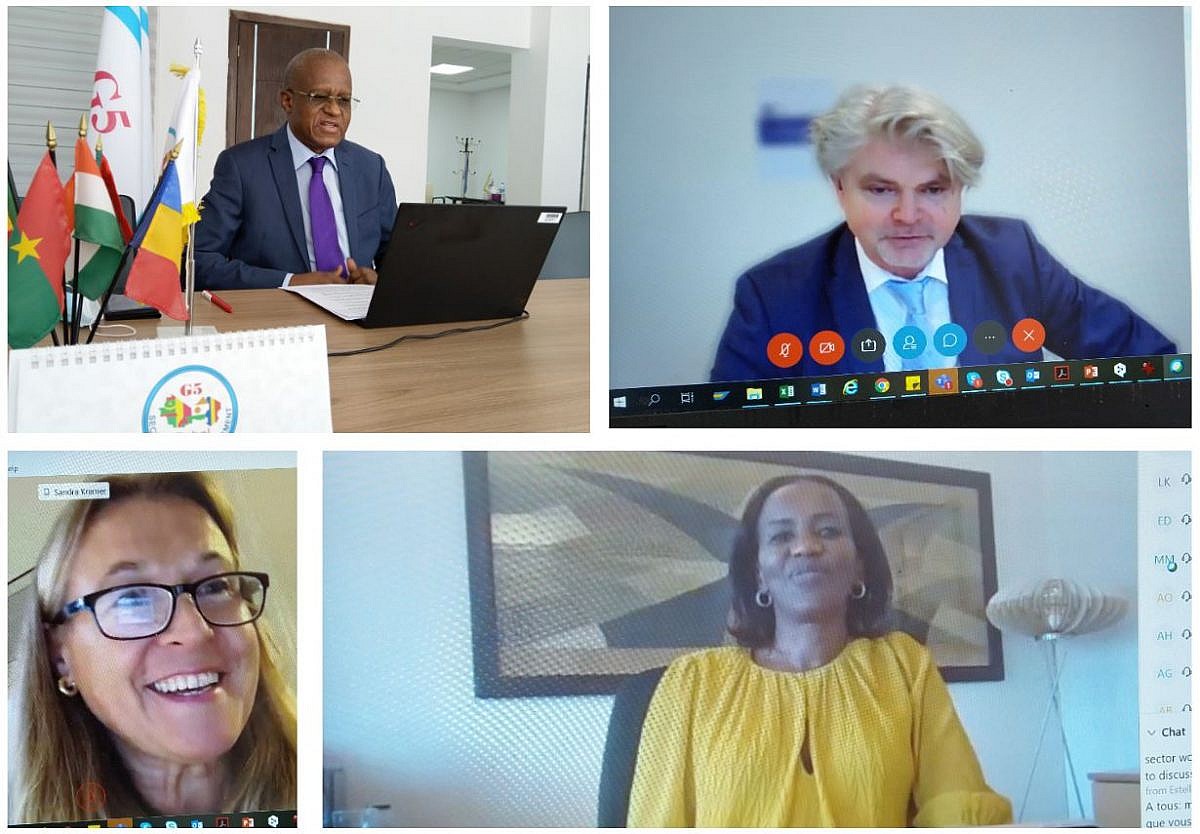 The meeting started with an introductory address by the session chair, Mr. Christophe Rauh, the Director for Africa at the German Federal Ministry for Economic Cooperation and Development (BMZ). Against the backdrop of the global Covid-19 crisis and recurrent regional challenges in the Sahel, he expressed pride in the role played by the Sahel Alliance as a platform for cooperation and called on participants to further intensify and concretise joint efforts in the field of development. Mr. Christophe Rauh also noted the rising quality of the relations between the Sahel Alliance and the G5 Sahel Executive Secretariat.

HEM Maman Sidikou, Executive Secretary of the G5 Sahel, then recalled that growth in the Sahelian context is first and foremost driven by enterprises, indispensable stakeholders in the implementation of the Integrated Priority Action Framework (CAPI), and that economic development in the Sahel contributes to the stability and prosperity of the region. He expressed the wish that the discussions that followed the signing of the Memorandum of Understanding with the Union of Chambers of Commerce and Industry of the G5 Sahel be translated into concrete actions. HEM Maman Sidikou reminded participants of CAPI’s priorities: the financing of quick impact projects involving the private sector and local authorities and the targeting of interventions on border areas. He stressed that pastoralism is an important element of resilience and economic stability in the region.

The representative of the Mauritanian presidency of the G5, Mr. Nany Mohamed Salem, for his part, stated what motivates the commitment of the participants: to serve the Sahelian youth, of whom the under-30s represent nearly 70% of the population, by offering them prospects for the future.

The representative of the Spanish Cooperation (AECID), Mrs. Cristina Diaz, then took the floor to share the priorities of the Spanish Presidency of the Sahel Alliance (raising the political profile of the Sahel Alliance at international level and on the ground in the G5 Sahel countries, developing political dialogue at the highest level with the G5 Sahel and expanding the number of members and observers to increase attention and support for the Sahel), as well as the priority themes of the Presidency (response to the negative socio-economic impacts caused by Covid-19, food security and climate change, promotion of gender equality and women’s rights, good governance and public policy reform). A virtual meeting took place between the Spanish Minister, Arrancha Gonzales Laya, and the G5 ministers to find out their expectations of the Sahel Alliance and a second meeting is scheduled for December to take stock of the Presidency’s initiatives.

The youth, a tremendous potential of the Sahel

Mrs. Sandra Kramer, Director of Devco, drew attention to the worrying global situation, leading to an increase in world poverty for the first time since 1998. In many countries, hard-won development is regressing and social and economic conditions are deteriorating, especially for the most vulnerable. The European Union supports the work on the accountability framework as a policy instrument to strengthen efforts in favour of people in remote areas. In conclusion, Mrs. Sandra Kramer highlighted the youth and tremendous potential of the population of the Sahel, for whom employment opportunities must be created.

Developing the private sector was the topic of a first working session. As coordinators of the “private sector” working group, the EIB and the European Commission communicated their recommendations concerning the challenges of the private sector in the Sahel: the need for public reforms to improve the business climate, the implementation of specific measures and programmes in support of the private sector, the development of financial instruments adapted to the Sahelian context, as well as the strengthening of dialogue between the different partners (from the informal to the regional level). The working group concluded by presenting the next steps, including the organisation of the “Sahel Business Forum”.

During the following session, AFD and World Bank representatives presented a decision note on the implementation of joint and coordinated interventions in priority areas. At the previous steering committee meeting, the members had indeed agreed on the need to continue implementing the Integrated Territorial Approach (ITA) and to step up their efforts in fragile areas. However, given the extremely sensitive context of implementation, the members wished to deepen their common understanding of the operationalisation of the ITA. A series of recommendations aimed at improving the coordination of interventions in fragile areas was therefore proposed and adopted by the members of the Sahel Alliance.

During the third session, the members of the Sahel Alliance and the G5 reaffirmed their desire for greater mutual accountability, within a framework of dialogue with the G5 Sahel, as approved during the previous steering committee. The participants recognised the need to clarify this mutual accountability framework, with the assistance of an external consultant. Chad was chosen as the pilot country, due to its forthcoming accession to the current G5 presidency in February 2021.

Participants welcomed Norway as the 14th member of the Sahel Alliance, and the Organisation Internationale de la Francophonie (OIF) as an observer member. In its speech, Norway noted the key role played by the Sahel Alliance and the Coalition for the Sahel as privileged frameworks for dialogue with the G5 Sahel and pledged to support the G5 Sahel countries in the management of the demographic process, the inclusion of women and food security, including in crisis areas.

During the information session on the Sahel Coalition and the Partnership for Security and Stability in the Sahel, Mr. Angel Losada, European Union Special Representative for the Sahel, reminded the members of the alliance that “the return of the state in fragile areas must remain a central focus” and that dialogue between the G5 and the Sahel Alliance is key.