The 7th meeting of the Operational Steering Committee (OSC) of the Sahel Alliance was held on Monday 13 December 2021 in Brussels at the invitation of the Director for Africa of the German Federal Ministry for Economic Cooperation and Development (BMZ), Christoph Rauh, the current chairman of the OSC. This meeting was attended by nearly 100 representatives from all Alliance members and several partners. The session was marked by the presence of the current Chairman of the G5 Sahel Council of Ministers, Minister Issa Doubragne, the Executive Secretary of the G5 Sahel, Mr Eric Tiaré, the High Representative of the African Union for Mali and the Sahel, Mr Maman Sidikou, the European Union Special Representative for the Sahel, Ms Emanuela Del Re, and the High Representative of the Sahel Coalition, Mr Djimé Adoum.  Mr. Ibrahim Thiaw, Executive Secretary of the United Nations Convention to Combat Desertification (UNCCD) was the guest of honour. 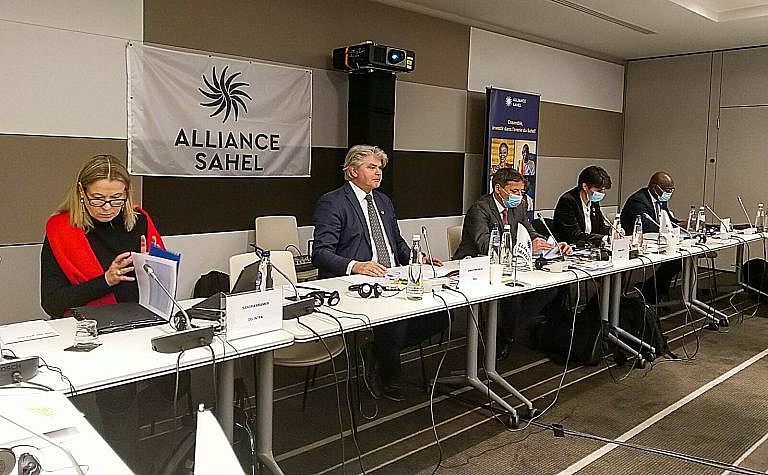 In his opening remarks, Christoph Rauh addressed the complex situation and expressed the urgent need for action. “The G5 countries are under pressure. This situation pushes us, as the Sahel-Alliance, to expand the impact of our efforts on the ground. We all need to coordinate our cooperation at different levels and in different areas of work to achieve tangible results for the people. At our institutions’ headquarters, we need to advocate for more flexibility in our approaches and cooperation mechanisms in the field and to adapt our strategies to local circumstances”.

The 7th OSC was enriched by the interventions of Sahelian High Representatives, whose contributions enhanced the proceedings. Dr Issa Doubragne, in his capacity as Chairman of the G5 Sahel Council of Ministers, stressed that “Since 2017, we have strengthened our political dialogue with the Sahel Alliance, and we now truly consider ourselves as partners. The holding of this 7th operational steering committee of the Alliance bears witness to the strength of this dialogue. Development is at the heart of the G5 Sahel’s Chadian roadmap as well as the Sahel Coalition’s roadmap. I plead once again for the need to strengthen the capacities of the sectoral ministries of the G5 Sahel States and their full involvement, via the economic operators, in all partnership processes, programmes and development projects. »

Dangers faced by the Sahelian people: a key concern 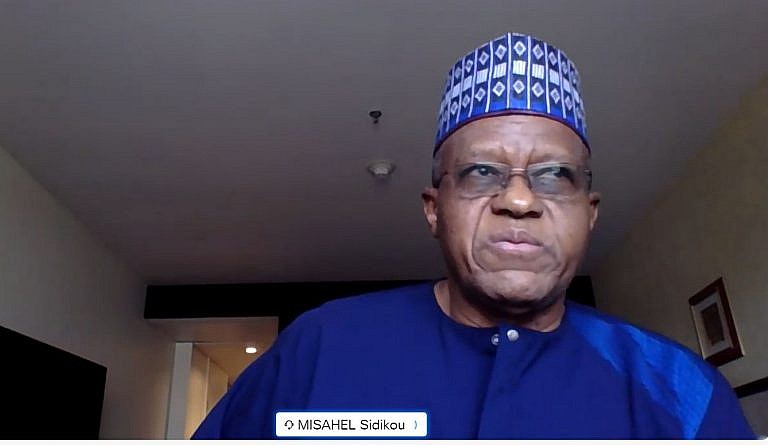 Maman Sidikou, High Representative of the African Union for Mali and the Sahel, spoke about the current situation. “The security situation is marked by the persistence, if not the resurgence, of terrorist attacks against the Defence and Security Forces (DSF) and the civilian population. It should be noted that the attacks are also accompanied by extortion of property, kidnapping of civilians, destruction of property, theft of livestock and assassinations. This is true not only in Mali, but also in Burkina Faso and Niger, and it will soon apply to the neighbouring countries to the south (Gulf of Guinea) as well if the appropriate measures are not taken. This situation carries enormous political, socio-economic and human rights consequences.

The Executive Secretary of the G5 Sahel, Eric Tiaré, recalled that “it is critical that we focus on tangible and concrete results that can reassure and give credibility to our joint actions. In this respect, the Alliance’s role is essential, particularly in the joint leadership, with the G5 Sahel, of Pillar 4 of the Sahel Coalition, with which my Secretariat has made contact and maintains good collaborative relations. The Chadian Presidency’s roadmap, from which the G5/ES’s work programme is derived, attaches great importance to the implementation of development projects aimed at consolidating the military gains achieved by the Joint Force and its partners.”

Sandra Kramer, Africa Director at INTPA (EU), drew the audience’s attention to the threats to food security: “We are beginning to witness an unprecedented crisis, with 10.5 million people potentially needing food assistance in the G5 countries to ensure their survival by next summer, and already 6.6 million in need; the Sahel Alliance is not directly providing humanitarian assistance, but we cannot ignore the situation. (To the EU) Beyond ECHO, we are redirecting part of our assistance towards food security and resilience-related interventions.” 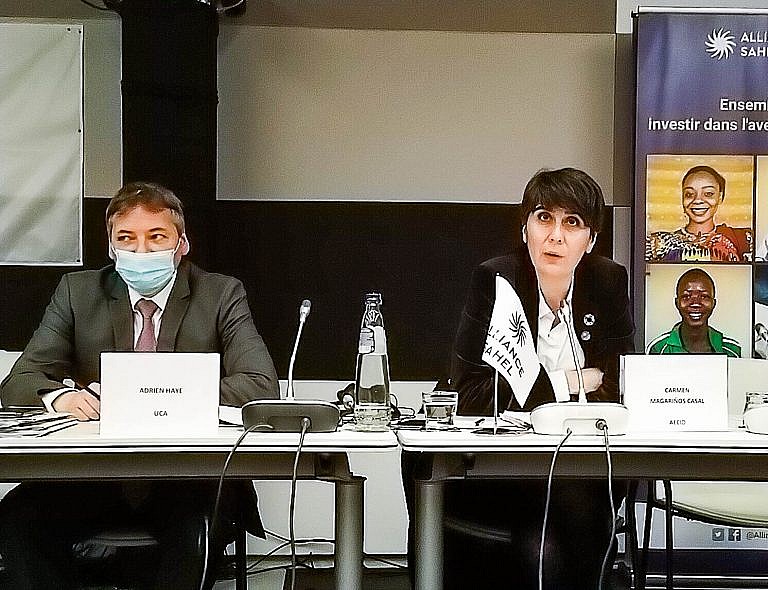 A few months before the upcoming General Assembly of the Alliance, Spain’s representative, Carmen Magariños Casal, speaking on behalf of the Sahel Alliance current chairmanship, presented her country’s priorities: “We aim to focus our work on strengthening support to the presence of the State, paying greater attention to ITA prevention areas, pursuing efforts in all priority areas. In addition, we will continue and scale up support for the empowerment of Sahelian women and the Women and Peace and Security Agenda. We also want to propose, as a core action of our Presidency, a new impetus for youth in the Sahel. Boosting investment in education and training to create opportunities for young people in the Sahel is crucial for stability and sustainable development in the region.”

Build on concrete initiatives and the region’s potential 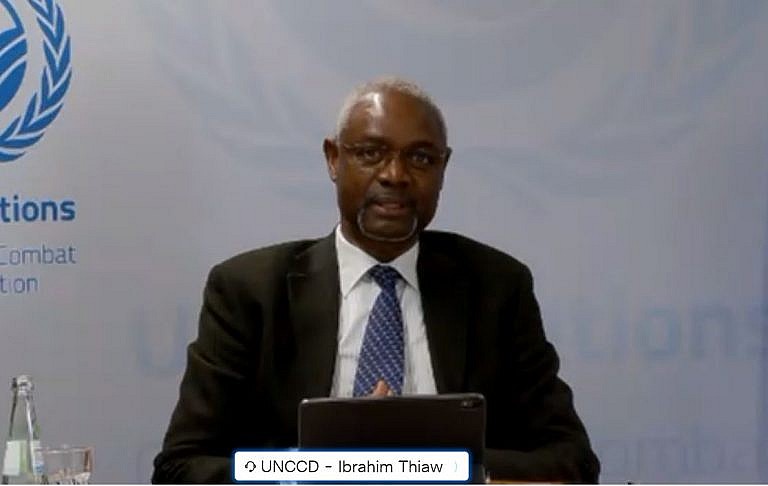 Ibrahim Thiaw presented the Great Green Wall (GGW) initiative, an integrated dryland development programme underway in 11 countries of the Sahel-Saharan band. By the end of the century, these countries may have a population of 1.5 billion. “The Great Green Wall can help prevent conflicts, particularly by having a positive impact on access to water and by helping young people settle in their territories. The Great Green Wall and the Sahel Alliance would benefit from coordinating their actions, particularly with a view to changing the approach to development in the Sahel, and reversing negative trends.”  Since the beginning of the initiative, 4 million hectares have been reforested, but further action is needed to reach the 2030 targets. 8 million hectares need to be replanted per year, which requires an investment of USD 4 billion per year. 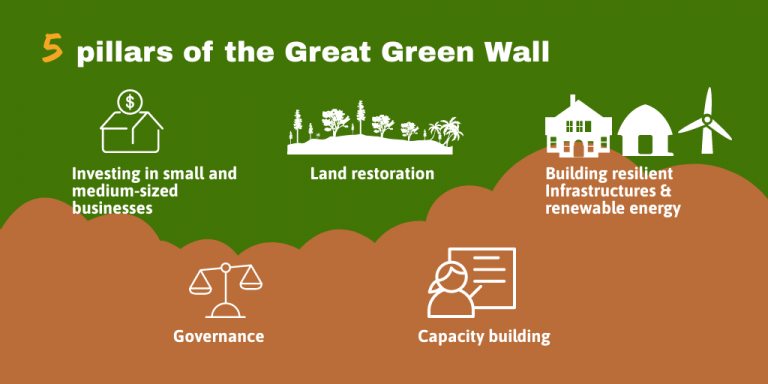 To boost the momentum, last year’s One Planet Summit in Paris led to the creation of the GGW accelerator. Six out of eight investors in this initiative are Sahel Alliance members. “There is a real need to forge partnerships with institutions such as the Sahel Alliance in order to succeed in tackling the GGW challenge. The G5 Sahel countries have a common cultural heritage, which is an important foundation. Drawing on this cultural heritage is a lever for the rebirth of the Sahel, and the Alliance and the GGW could also join forces to tap into the potential that this cultural heritage offers to work towards stabilising the region. Several participants in attendance, including representatives from France, the Netherlands, the G5 Sahel ES and the EU, expressed their institutions’ support for the GGW.”

The EU Special Representative for the Sahel recalled that “We often talk about security in the Sahel without taking into account the long-term effects of a deteriorated environment on the region’s stability. Synergies with the GGW initiative can benefit the security, economy and environment of the Sahel. This could create important opportunities for the sustainable development and stability of the region. The Sahel needs a positive attitude. A new impulse to change the narrative is required. We cannot deny that the region faces major challenges, but there are hidden potentials. In the Sahel there are opportunities to create wealth for all. We need to make it clear, for example, that the private sector has an important role to play and that it has much to gain from the extraordinary conditions that the region offers, such as an extremely young population in need of economic opportunities. Of course, we need to ensure that the right conditions for investment are in place, thus creating a virtuous circle. ”

A new member joins to strengthen efforts in the Sahel

Participants welcomed Sweden’s accession as a full member. Finally, they thanked the secretariats of the Coalition for the Sahel and the Partnership for Security and Stability in the Sahel (P3S) for their presence, which testifies to the effort expended to strengthen coordination.

Jorgen Karlsson, Sweden’s Representative, shared his country’s priorities for the Sahel:  “The Sahel is a major commitment for Sweden, through contributions to the UNMISMA, Task Force Takuba and EU CSDP missions, as well as in humanitarian aid and development cooperation. Our thematic priorities include human rights and gender equality, democracy and good governance, environmental sustainability and climate change, and conflict prevention.” 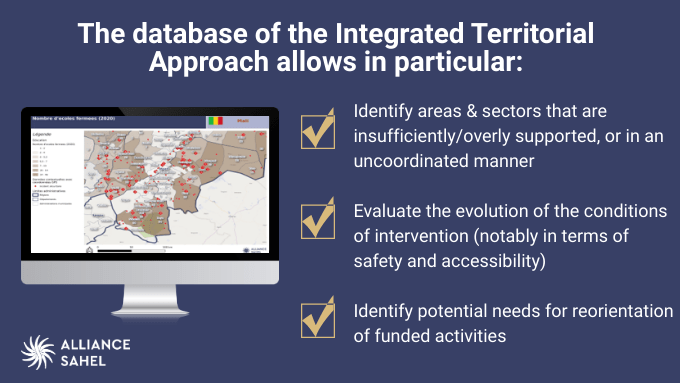 The Operational Steering Committee came to the following decisions upon completion of its work :

< JOINT STATEMENT: Funding for the Regional Public Investment Programme of the Hodh Ech Chargui 2022-2025
Scroll back to top