On Thursday 3 June, a workshop was held in videoconference format to discuss the prospects of digital technology for developing youth employment in the Sahel. This event, initiated by the Organisation Internationale de la Francophonie (OIF), was held within the framework of the “private sector” working group of the Sahel Alliance. 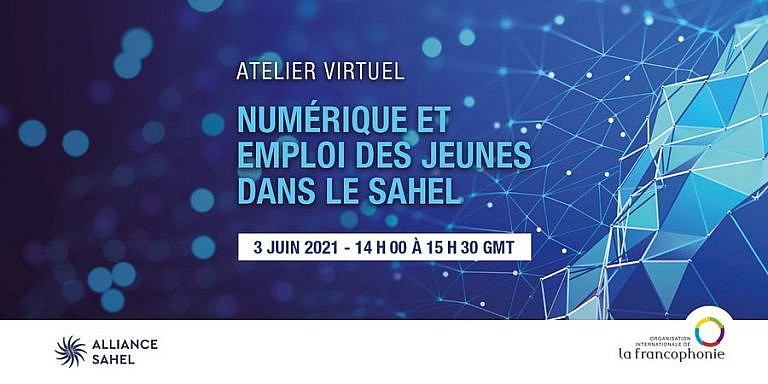 The rationale for choosing this particular topic is obvious: for many years now, digital technology has played an essential role in the development of countries.  Reinventing a professional offer adapted to the digital transformation of the economy is becoming a major challenge for all French-speaking countries affected by the changes in the employment market and the explosion of new digital professions.

Taking up this challenge would not only allow the adaptation of economies and the labour market to the digital transformation of societies but will above all offer new perspectives to young people! They are still too severely affected by unemployment and are largely exposed to the many risks of often precarious employment, particularly in the Sahel. In this region, 65% of the population is under 25 years of age but represents less than 10% of the active population.

The issue of youth and its access to employment is at the heart of the peace-security-development nexus. The prevalent situation regarding youth and employment is very specific to the Sahel: 65% of the population is under 25 years old, but represents less than 10% of the active population. At the request of the Secretary General, the IOF has developed a series of initiatives: Radio Jeunesse Sahel to connect young people and provide them with useful information. Also the D-clic programme, which will reach 3,000 learners and which focuses on digital training », as emphasised by Mr Henri Eli Monceau, Director of the Economic and Digital Francophonie, in his introductory speech.

Providing young people with an innovative framework to enhance their skills

The digitisation of the economy and skills is important for students just out of school, but also for young people who are already working and who have not had the chance to be trained in digital technology. Efforts must focus on offering these young employees (often in the informal sector) an innovative framework that allows them to strengthen their digital skills and use them to digitise their activities, to access the market », according to Frédéric Lapeyre, Director of the ILO office in Côte d’Ivoire.

Among the concrete initiatives presented during the workshop, Ms Keita Leila described the KABAKOO project – working in local entrepreneurship anchored in digital technology. The Kabakoo learning experience enables young people in Africa to acquire the skills to create businesses, get jobs and overcome gender inequalities through 6 to 18 month training courses. It is thanks to this project that Sene Yiriwa, in Mali, has launched its structure for designing precision agricultural solutions (such as smart irrigation stations). 3 jobs have already been created and the income from the project is 99 times higher than the average monthly salary in Mali! An inspiring success story for young Sahelian entrepreneurs.

In line with the conclusions and recommendations of the “Dialogue with the Sahelian private sector” organised by the Sahel Alliance’s “private sector” working group on 15 February 2021, this workshop stressed the importance of digital technology for the private sector in the Sahel, emphasising support for training, entrepreneurship and the creation of income-generating activities in this field, as well as the role of information in raising awareness of these issues and communicating about the opportunities in the region. Undoubtedly a debate to be continued and new synergies to be created.

More information on the “Radio Jeunesse Sahel” project supported by the OIF: www.radiojeunessesahel.com

< G5 SAHEL EMERGENCY DEVELOPMENT PROGRAMME
Water and sanitation in Burkina Faso: a coordinated response to the needs of the people of the Sahel region >
Scroll back to top