At the invitation of the Africa Director of the German Federal Ministry for Economic Cooperation (BMZ), Christoph Rauh, current chairman of the Alliance Sahel’s Operational Steering Committee (CPO), the sixth CPO meeting was held on Wednesday 2 June 2021 by video conference. This meeting brought together more than 100 participants from all Alliance members and was attended by Minister Issa Doubragne, current President of the G5 Sahel Council of Ministers, the Executive Secretary of the G5 Sahel, Mr. Maman Sidikou, and the High Representative of the Sahel Coalition, Mr. Djimé Adoum.

The 6th Steering Committee of the Alliance took place at a time when several countries and regions of the Sahel are traversing challenging times, caused by both the aggravation and multiplication of security incidents and the consequences of political crises. 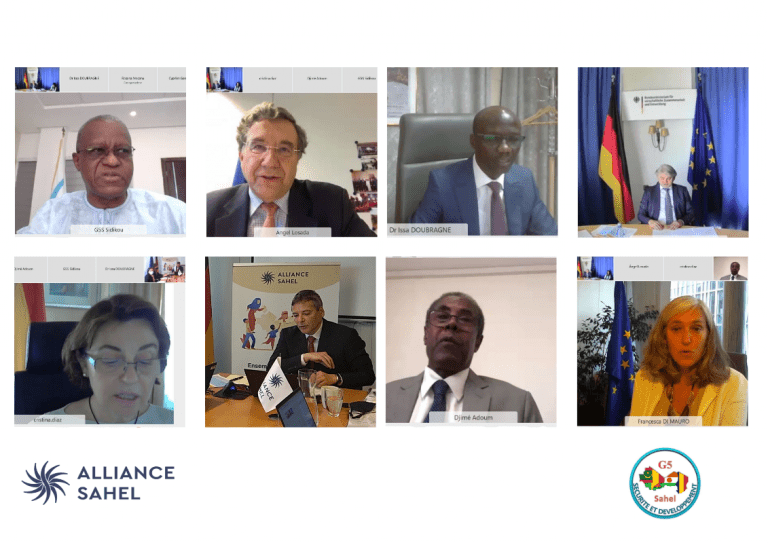 The latest events in Chad and Mali remind us of the fragility of the region. The stability and security of the people living in the region are closely linked. We can see that this is not the time to lower our guard, but to redouble our efforts within the Alliance Sahel. Today we have important decisions and recommendations on the table, » said Angel Losada, EU Special Envoy for the Sahel, in his introductory speech.

Minister Doubragne, in his capacity as President of the G5 Sahel Council of Ministers, recalled in his speech the priorities of the roadmap of the Chadian Presidency.

The expectations of the G5 Sahel in terms of security and development require more consultation to facilitate and strengthen the flow of information as well as accountability between the G5 Sahel and the members of the Alliance Sahel. In order to consolidate joint efforts, we must emphasise the importance of the discernibility, visibility and effectiveness of actions supported by partners and encourage all types of consultation and interaction to increase the impact and speed of project implementation. »

The CPO aimed at taking stock of the progress made in the implementation of the recommendations adopted at the General Assembly of the Alliance Sahel, which was held on 15 February 2021 on the margins of the G5 Sahel Heads of State Summit. The discussions focused in particular on the status of implementation of the Integrated Territorial Approach (ATI) in the priority areas and the development of its tools; the priorities of the political dialogue and accountability framework between the Alliance Sahel and the G5 Sahel; the monitoring mechanisms of the Sahel Coalition’s roadmap; recommendations for a better integration of climate change considerations in the Alliance’s portfolio; a new financial tool, the G5 Sahel Facility, supported by the BMZ and the KfW (€50M initial endowment) in close collaboration with the SEG5; the 2020 annual report on the Alliance’s portfolio as well as the functioning of the Alliance Sahel.

The representatives (AfDb and the Netherlands) of the Climate Working Group presented a series of recommendations to further integrate climate change issues into Alliance’s portfolio. These included the need to strengthen dialogue and cooperation with the G5 countries on climate action in the Sahel, and to deepen knowledge of members’ climate-related initiatives and build on these to strengthen capacity within the G5 countries to address climate change issues (read the full note on recommendations).

The Executive Secretary of the G5 Sahel, Mr Sidikou, recalled the importance of the climate issue in the region’s trajectory:

In addition to the phenomenon of terrorism, the effects of climate change are aggravating factors in the region’s crises and contribute to creating and exacerbating local conflicts. I welcome the work done by the Climate Thematic Group, co-chaired by the Netherlands and the AfDB. I want to stress the need to accelerate the implementation of the Desert to Power initiative and call on partners, including the Green Climate Fund, to participate in its financing. The private sector also has an important role to play, especially in funding clean energy projects. »

The Integrated Territorial Approach, a privileged coordination tool for the Sahel Coalition

The President of the CPO recalled the importance of the return of the state in vulnerable areas and the structural reforms that must be carried out in the framework of the public policy dialogue between the Alliance Sahel and the G5 Sahel.

In order to deal with the multiple crises in the Sahel, it is essential that the state returns to the most remote and fragile areas. This means that the state must be able to provide basic services such as education, health care, water and sanitation. We support our national and local partners in this process by implementing concrete projects on the ground. However, structural changes are also needed in the G5 countries to strengthen local authorities and involve civil society. These are important topics for our work in priority areas as well as for the political dialogue », said C. Rauh.

Participants welcomed the progress made in recent months in operationalising the Integrated Territorial Approach (ATI), as well as the tools developed to facilitate its implementation, and encouraged further efforts in all the selected priority areas. For Mr Djime Adoum, High Representative of the Sahel Coalition:

The promotion of the ATI is a priority for action and I plan to consult with Coalition members on its operationalisation beyond the Alliance Sahel. We see that ATI allows for joint actions where possible and can be used to increase coordination, joint programming and the overall effectiveness of our actions. We would like to expand the current ATI framework to move towards an integrated territorial approach at the Coalition level. This would not force the alignment of security or stabilisation actions to the geographic programming of development stakeholders (or vice versa), but to develop a common vision, where possible, and support the sustainable redeployment of public services. I therefore invite all actors involved in the Sahel Coalition to actively engage in the ATI framework, building on existing local strategies and coordination frameworks. »

The session dedicated to priority areas was also an opportunity to present the tools developed to support the implementation of the ATI, such as the database of members’ activities and the Sahel Analysis, Monitoring and Learning Platform (PASAS). This platform allows for the production, valorisation and sharing of in-depth knowledge on the Sahel and the Lake Chad Basin, in order to inform the design of development projects and guide intervention decisions.

Alliance Sahel members endorsed the continuation of the mandates of Spain as Chair of the General Assembly (Minister of Foreign Affairs, European Union and Cooperation Arancha Gonzàlez Laya) and Germany as Chair of the CPO (BMZ, Africa Director Christoph Rauh) for the next 12 months.  The observer status and the architecture of the coordination groups of the Alliance Sahel were also clarified. The participants warmly thanked the European Union Special Representative for the Sahel, Angelo Losada, and the Executive Secretary of the G5 Sahel, Maman Sidikou, for their strong commitment to the Alliance and wished them the best of success for their future missions.

Finally, despite the many challenges and crises facing the region, Mr. Rauh recalled that:

The Sahel is first and foremost a region with great potential and opportunities. It is rich in natural resources, possesses a valuable cultural heritage and has a young population that can be a force of innovation and development. »

< Water and sanitation in Burkina Faso: a coordinated response to the needs of the people of the Sahel region
Scroll back to top